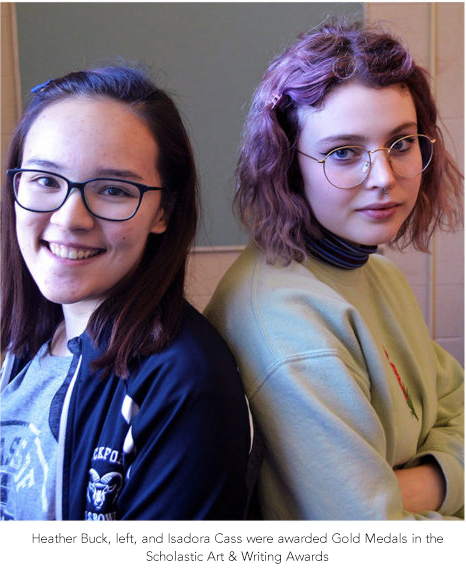 Isadora Cass turned an unhappy childhood night with the flu into a national award-winning piece of art. Incongruously titled “Happy Birthday,” it shows an ill-looking doll’s head trapped inside a music box, which is how she felt at a sleepover birthday party where she got sick and couldn’t go home because of a snowstorm.

“I could hear everyone having fun, and I could hear music downstairs,” recalls Isadora, a Rockford High School senior. “I felt so lonely. I wanted to capture that feeling of loneliness.”

Creating the piece from found objects not only provided catharsis, but won her a Gold Medal from Scholastic Art & Writing Awards. The nonprofit Alliance for Young Artists & Writers since 1923 has celebrated the creativity of teens nationwide. Students submitted nearly 340,000 works in 29 categories this year.

Heather’s colorful drawing, “Life,” shows a happy girl embracing equally happy-looking creatures. It was inspired by the Japanese animated film director Hayao Miyazaki, as part of a series on the Four Horsemen of the Apocalypse for her AP art class.

“I was really inspired by how he chooses a girl to play a strong, main role,” says Heather, who works with Copic markers to create bold, anime-style lines. “I really wanted to show positivity and just a really pretty picture to look at.”

Another drawing of hers, “Fox Spirit,” won a Silver Medal in depicting a sly-looking girl with fox-ish ears. She plans to attend Kendall College of Art and Design and to pursue a career as an illustrator. Isadora plans to study illustration at Toronto’s Sheridan College and aims to be an animator and film director.

Cecelia’s winning piece, “Dahlias in the Evening,” focuses on the expression of love in the simplest sense.

“Not in the big fates and the loud weddings, but in the quieter moments in between the bustle of life,” she said. “I was looking for a big piece to make a larger background than I normally do, and decided on a scene that was crowded more by the details and the emotions than what the subjects were actually doing.”

Cecelia plans to go to Kendall to explore more illustrative and detailed techniques, she said.

“This was a big step for me,” she said. “I’ve been drawing since sixth grade. It’s a good way to express myself in a way that no other outlet does for me.”