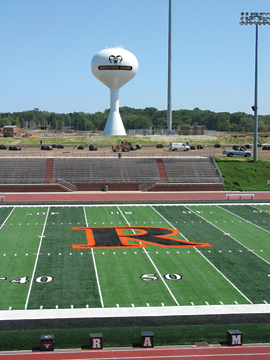 Rockford, MI – In 1991, the RPS Board of Education dubbed the high school varsity stadium “Ted Carlson Memorial Stadium.” Its namesake Ted Carlson was not only a community member who served as a trustee on the Rockford Board of Education, but he was well known as Rockford’s own “super fan” of Rockford sports.

One year later, Ralph Munger was hired as the Rams varsity head football coach, and nobody could have predicted how the next 27 years would play out. It was the beginning of a legacy.

Over the next 28 seasons, Coach Munger led the Rams to three MHSAA Division I state titles, 25 consecutive playoff years, and six undefeated regular seasons. When all was said and done, Coach Munger holds a 75% win/loss total career record. But numbers aside, Coach Munger instilled a sense of responsibility and pride in the student-athletes whose lives he touched

Mr. Carlson and Coach Munger, each in their own way, defined and promoted “Ram Pride”  throughout the community. Ram Pride isn’t only evident in high school sports, but in all of Rockford’s schools, academics, the arts, and the community in general. It is our culture.
These are among the many reasons that leads Dr. Shibler to recommend the Board of Education honor Coach Munger’s contributions alongside Mr. Carlson’s impact on the athletic programs and community.

At its regular meeting held on January 27, 2020, Dr. Shibler will recommend the Board of Education officially rename the varsity stadium “Carlson-Munger Stadium” to honor two men whose contributions exemplify Ram Pride.